A Stepping Stone to Homeownership 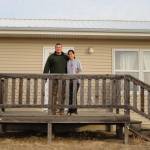 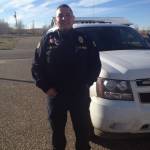 The past year has been full of accomplishments for Aaron Runs After, a member of the Cheyenne River Sioux Tribe who resides in Eagle Butte, South Dakota. It all started with a visit to the Four Bands Community Fund office.

Aaron heard about Four Bands from his brother who told a story of cleaning up past debt and improving his credit score. As a father of five, Aaron wished to make a permanent home that his children would enjoy but he knew his credit score was a barrier in reaching that goal. Aaron says, “The staff at Four Bands was very helpful. They all welcomed me from the first day I went there and greeted me with a smile.”

As a first step, we obtained a copy of Aaron’s credit report and, most importantly, helped him decipher it. He admits that it was a bit discouraging to see what came up in his credit report, but he kept a positive attitude and focused on short-term goals first. Our staff helped him develop a step-by-step plan to improve his credit. He says, “They explained everything that needed to be done, and I did it.”

Aaron decided to use our Credit Builder Loan to consolidate and pay off multiple debts that showed up on his credit report. He called all of his creditors to get settlement fees, and Four Bands paid them directly. This left Aaron with one simple payment to make each month on a lower interest loan. “It is more affordable, and you can work around it,” he says. As he repaid his Credit Builder Loan, we reported that information to two major credit bureaus. The result – Aaron established a positive credit history and increased his credit score by an astounding 90 points!

Using the Credit Builder Loan as a stepping-stone, Aaron was able to achieve his goal and obtain a mortgage to purchase a four-bedroom home. He says the best part of being a homeowner is that his children have their own rooms and space of their own. And, the financial education he received along with his loan has helped him to become a successful homeowner. “It made me more aware of my finances. It makes you take a closer look at what you are spending and to be able to decide what expenses are needs and wants,” he says. This skill of responsible spending will benefit him through the duration of his mortgage.

“It gave me a sense of accomplishment.”

To top it all off, Aaron was recognized during the awards ceremony at our 2013 Entrepreneurship Fair. For his outstanding effort, he was named the Credit Builder of the Year. “It gave me a sense of accomplishment,” he says. Aaron is looking forward to another accomplishment as he is set to finish paying off his Credit Builder Loan in the near future.