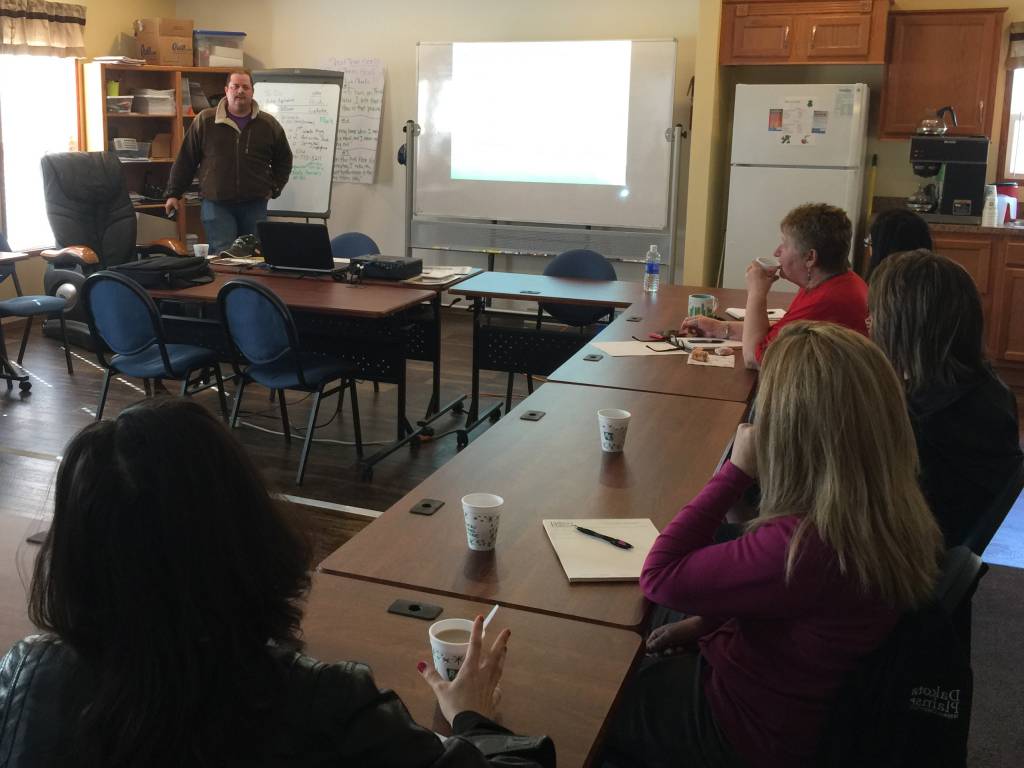 On the morning of April 3, 2015 a group of seven financial institutions and the Department of Interior gathered in Eagle Butte, South Dakota, to strategize on the anticipated influx of cash onto the Cheyenne River Sioux Reservation as a result of the Land Buy-Back Program for Tribal Nations – a program that has the potential to deliver $69 million into the pockets of over 8,100 the Cheyenne River Sioux Tribe’s members. The collaborative meeting focused on building partnerships, delivering financial education training, and offering financial products to help buy-back beneficiaries continue to grow this cash asset.

“This can be an excellent financial opportunity for some of our tribal members, and we are happy to see that so many of our local financial institutions are committed to helping people make their money matter,” says Lakota Mowrer of Four Bands Community Fund.

Jayme Murray, Fiduciary Trust Officer of the Department of Interior Office of the Special Trustee for American Indians, says, “The vision and the reason for this meeting is to have information available to beneficiaries that will financially empower them.”

The Land Buy-Back Program for Tribal Nations was created to implement the land consolidation component of the Cobell Settlement Agreement. Through the Buy-Back Program, the Cheyenne River Sioux Tribe will offer to purchase around 4,000 fractionated tracts of land – tracts of land with more than one owner – from willing individual tribal members. Through successful purchases, the fractionated land will be transferred into tribal trust ownership and funds will be transferred to tribal members.

The tribe will benefit through the ability to generate income by leasing the tracts of previously fractionated land. However, some question the true long-term benefit of a cash settlement to the individual tribal members. The first phase of Cobell settlements and the Salzar settlements also brought large sums of cash to tribal members in the area, but there isn’t much evidence of sustainable economic change.

“We’ve seen people buy new cars and other things, but these are short-term assets. This collaborative effort is about empowering people with information and choices that will strengthen the financial futures of our tribal members,” says Lakota.

With approximately half of the people on the Cheyenne River Sioux Reservation living in poverty, there rarely are opportunities to think about things like investing. “When it comes to finances, the majority of our reservation residents are concerned with things like buying groceries and paying utility bills. Earning interest and investing are often not discussed with people,” says Lakota.

Local financial institutions, including Four Bands, will partner with the Department of Interior Office of the Special Trustee for American Indians to provide information and offer financial tools, such as direct deposit services, certificates of deposit, and other investment opportunities. Other financial institutions that are participating in the collaborative effort include 1st Financial Bank, Black Hills Federal Credit Union, Dakota Plains Federal Credit Union, First National Bank, State Bank of Eagle Butte, and Western Dakota Bank.

Four Bands will accept investments from individuals in amounts as low as $5,000 with rates of return and terms similar to a certificate of deposit. We currently use a variety of private investments to provide loan capital for the start-up or expansion of local businesses and generate interest earnings to fund business training, financial education, and other asset-building programs. “Investing in Four Bands not only brings a financial return to an individual, but it also has a broader community impact in the way of job creation and improved quality of life,” says Tanya Fiddler of Four Bands.

Fractionated land tracts, resulting from the Dawes Act of 1887, have long-presented a barrier for tribal members seeking to build assets. While most Americans are able to use land as collateral in acquiring new assets, fractionated land has little benefit to individual owners. Requiring approval from the majority of owners – sometimes numbering in the hundreds – to build or make improvements, the land often times remains in a state of limbo. Initial buy-back offers are scheduled to be sent out early May, eliminating or greatly reducing these challenges.

Murray urges tribal members to contact the Office of the Special Trustee for American Indians to ensure that contact information and disbursement instructions are accurate on their accounts. “It’s important that we have up to date information so that people receive their buy-back offers and we know how to get their funds to them,” he says.

“The Land Buy-Back Program is transforming an inactive asset into a cash asset, and it will be up to our people to continue to grow that asset. We hope that this collaboration will have a significant part in encouraging wise financial decisions,” says Lakota.