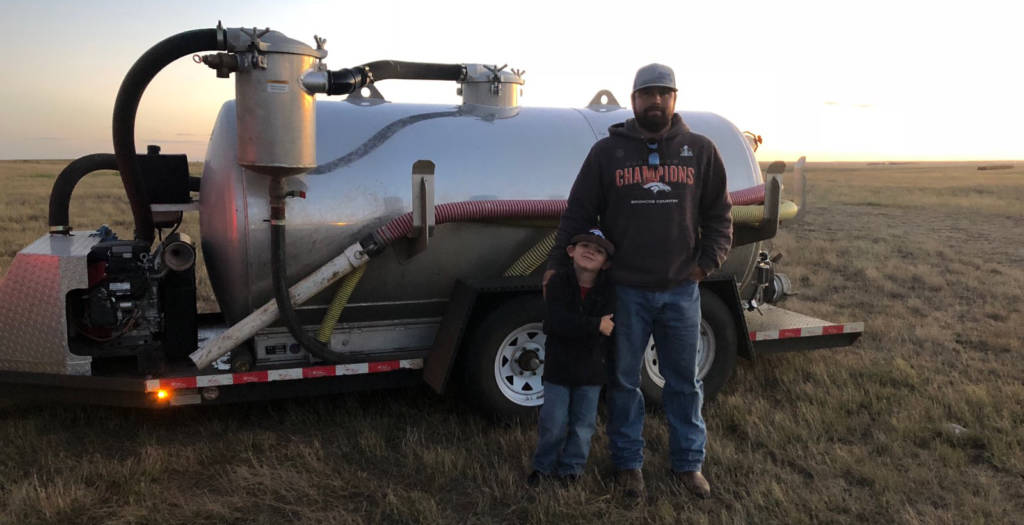 Pumping septic tanks probably isn’t the dream job most people hope to land someday. For Jeremy Ferguson it’s not even his only job, but it is one where he gets to be his own boss. He says having that independence feels pretty good, and that’s one of the things that keeps driving him day after day.

Jeremy started Ferguson’s Septic Service last summer with a business loan from Four Bands. Jeremy used his loan proceeds to purchase a fully-equipped trailer with a pumping system, and has been busy ever since.

“There’s a strong demand since nobody was doing it,” he says.

In the vast rural area of the Cheyenne River Sioux Reservation most residents use septic systems for their waste water treatment, and those systems need to be pumped as part of their regular maintenance. However, there hadn’t been a local septic service for a couple years, and people were using out-of-area service providers at much higher rates to get the job done.

“He just saw the opportunity, and it has turned out really well for him,” says Mark Shupick, Director of Business Development Services at Four Bands, who assisted Jeremy during the loan application process.

Within his first year, Jeremy built up a solid clientele and even established some contracts with the Tribe. He employs two part-time workers and is exploring the potential of expanding his business to start offering port-a-potties.

Mark believes Jeremy’s success also has to do with his work ethic. He comments, “He’s easy to communicate with and always reliable.”

Ferguson’s Septic Service is helping to build the local economy.

Mark says, “Well there’s the job creation, and the fact that people aren’t having to spend as much on this necessity. But there’s also the fact that what they are spending is going back into our local economy instead of out of the area.”

He explains that the longer money circulates in the area, the more economic benefits local residents will see.

Jeremy sees other benefits, too. Another thing that drives him toward success is his son. He says, “I want to make his life better and give him what he wants.”

At home his five-year-old little boy often uses his bike to “go do a pumping job.” As he watches and emulates his dad’s every move, it’s likely that he’s learning about a lot more than septic systems.